Saving an Island – Gearing Up for Construction in the Tennessee Valley

Saving an Island – Gearing Up for Construction in the Tennessee Valley

Saving an Island – Gearing Up for Construction in the Tennessee Valley
June 13, 2022 The Tennessee Valley Authority (TVA) is gearing up to build a 217-foot-long berm  across an island between Norris Dam and the Norris weir, which is about a mile downstream from Norris Dam. The berm will protect the island from extensive erosion, save the existing re-regulating weir, guarantee enough environmental flow (a term describing the quantity, timing, and quality necessary to sustain river ecosystems) below the dam to protect aquatic life downstream, and preserve an important recreation spot for anglers.

Personnel from TVA’s Engineering Laboratory conducted the fieldwork for this estimated $1 million construction project; the work is expected to begin in October of 2022 and will be completed in September of 2023.

By examining the scenarios TVA considered, the obstacles they faced, and the solutions that prevailed, other hydropower operators can learn what to do when addressing the impacts of erosion.

Norris Dam impounds water to run through a 110-MW hydroelectric powerhouse that was completed in 1936. The uninhabited 10.6-acre Hibbs Island connects the two sections of the Norris re-regulating weir, a low dam built to regulate the release flow from Norris Dam.

Hibbs Island is owned by TVA as part of Norris Reservation, the area surrounding Norris Dam. Hibbs Island is a small section of land that houses no residents but is still vital to the surrounding community and ecosystem, as it provides environmental flow for several miles of riverine aquatic life. The island is in Norris, Tennessee, on the Clinch River at Mile 77.9. The erosion of Hibbs Island, and its proximity to TVA’s dam, as seen from the downstream perspective.

The main purpose of the Norris weir is to regulate water flow during times when the hydro plant is not operating and thus not releasing water below Norris Dam, ensuring a constant minimum flow downstream. The minimum flow is paramount for the local fishing attraction, and the weir helps control flooding and promotes public safety.

Throughout the years, the high flow releases from Norris Dam, such as spilling, have resulted in high river currents, which, in turn, have caused part of the 10.6-acre island to erode and deteriorate. If Hibbs Island deteriorates, the flow could then pass through the area between the weir sections.

To create a solution to combat the deterioration of the island and thus ensure stability of the re-regulating weir, TVA hired Mesa Associates, Inc., a full-service engineering, procurement, and construction management firm, in 2020 to conduct an evaluation of Hibbs Island. Mesa Associates determined immediate action should be taken to preserve the island to guarantee the proper functionality of the weir.

If no action were taken, the island would likely continue to erode and eventually disappear. If the island were to disappear, the re-regulating weir’s functionality could be at risk because the flow could then pass through the area between the weir sections, which would damage the integrity of river ecosystems and impair the function of the hydroelectric facility

“A 2010 attempt to reinforce the mid-section of the island to prevent erosion showed that a more rigorous reinforcement was necessary due to future anticipated high river flows from Norris Dam spilling events,” said TVA’s program manager for reservoir release improvements.

After the initial attempt to reinforce the mid-section of Hibbs Island in 2010, TVA faced additional construction challenges in following years due to historically high river flows in 2017, 2018, 2019, and the 2020 spilling events. 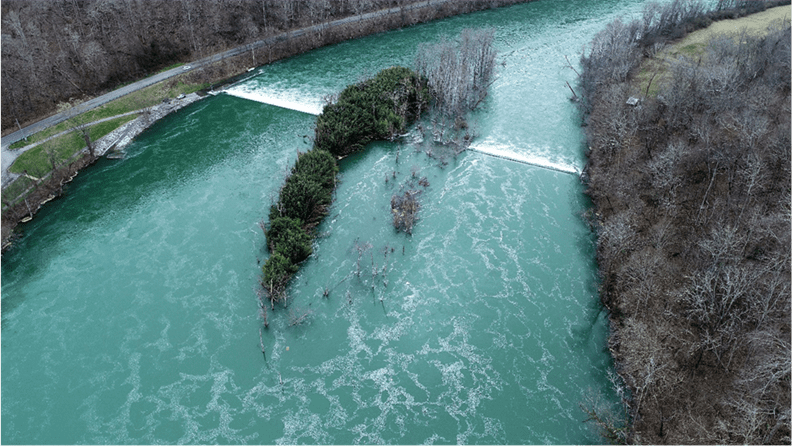 The erosion of Hibbs Island as seen during a spilling event, demonstrating the need for a berm.

THE DEEP DIVE: HOW TVA IS PRESERVING THE ISLAND

Before landing on the decision to build the berm, TVA and Mesa conducted techno-economic analysis assessments to better understand potential benefits derived from each option to preserve the island and protect the weir, including:

From the analysis, TVA determined installing a berm between the weirs was the best option.

By installing a berm across the center of the island between the existing concrete weir abutments, the berm will redirect all flow of the river over the weirs to maintain their designed intent.

Mesa’s team of engineers and consultants identified and assessed the environmental impacts  associated with rehabilitating the island and its surroundings. Additionally, Mesa established specific times and operational requirements to adhere to during construction of the berm. This would ensure that there were no interruptions to power generated by hydroelectric units at Norris Dam while also guaranteeing the non-interruption of the environmental flow downstream of the weir.

The current berm between the weirs has an approximate elevation of 828 feet. Soil would be laid over the top of this berm and stone or riprap placed upstream of the existing berm to allow that work to be completed “in the dry.” The new berm’s upstream side will use riprap – a permanent layer of stones designed to protect against erosion – for stabilization, and the abutment walls will be raised to 831 feet, matching the new berm elevation.

When the berm has been installed, the flow of the water will be redirected over the weirs. By halting water flow over the island, the risks and dangers of erosion will be mitigated, resulting in a longer lifespan for the weir, as well as maintaining its function as an important site for outdoor recreation and angling. Sedimentation represents a serious threat to hydropower sustainability by reducing energy production, storage, and flood attenuation capabilities. When sedimentation increases, the load on the dam also increases which can cause damage to mechanical equipment. TVA’s approach to both identifying and solving the erosion concerns of Hibbs Island demonstrates how organizations can utilize proactive assessments of environmental impacts, and then engineer solutions to safeguard recreation sites, the environment, and hydropower operations without sacrificing power generation or environmental flow.

The Environmental Protection Agency’s data on climate change show an increased frequency of intense rain events, which worsen erosion and sedimentation. The realities of climate change indicate that these ‘one-off’ events are occurring with greater regularity. Hydropower’s place in the clean energy future is critical, so operators should take TVA’s work at Hibbs Island to heart.